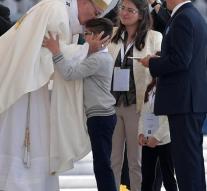 ftima - Pope Franciscus has declared two children from this place holy in the Portuguese pilgrimage town of Fátima on Saturday. At the service there were hundreds of thousands of people, many of whom had slept to ensure a good place. They applauded loudly when Pope Francisco, Jacinta and Marto declared holy.

The children reported exactly 100 years ago at the age of nine and seven that they had seen and heard Mary, the mother of Jesus, outside of that place. The children used to be sheep at that time. There were several appearances. The children both died two years after.