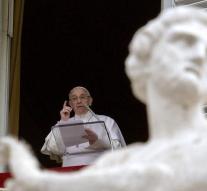 - Pope Francis on Monday strongly condemned the attack in Pakistan. The attack in Lahore came seventy people dead, including many Christians. The pope called the act 'horrendous' and demanded the Pakistani authorities that they protect the country religious minorities.

During a speech in St. Peter's Square on the occasion of Easter Monday Pope Francis said that Pakistan 'is bloodied by a horrific attack that so many innocent people lost their lives.'