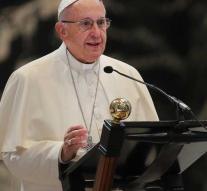 rome - Pope Francis compared abortion with rent murder. In the past, the pope sometimes said that his Roman Catholic Church is too concerned with debates about abortion. He also showed some understanding in 2015 for women who let their pregnancy end 'because they see no other way out.' He also described abortion as a sin, but at the same time as a tragedy.

During the weekly audience at Saint Peter's Square in Rome, Francis said Wednesday: 'Taking away a person is like hiring a hired killer to solve a problem. 'He rhetorically asked' how an act that ends an innocent life can be therapeutic, civilized and human? '

In June, Francis expressed himself in fierce terms against the termination of pregnancies when the unborn child has disabilities or serious disorders. He found that similar to Nazi practices.