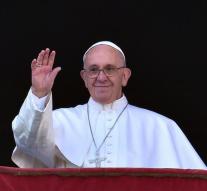 - Pope Francis on Wednesday announced a major reorganization of the Vatican. He thus comes the promise that he would clean up, which he did when he took office more than three years ago.

In a so-called Motu Proprio, a document,, on its own initiative, '' he says include four offices will merge within the Vatican a ministry for integral human development. The prelate takes the portfolio migration provisionally under its own wing.

The church office is haunted for years by scandals and allegations of corruption and greed. Upon his arrival Francis called for a major cleaning that will lead to a,, poor church for the poor ''.