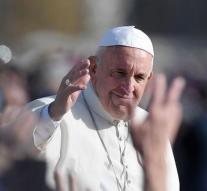 - Pope Francis on Sunday closed the Porta Sancta, the Holy Door of St. Peter's Basilica. This is an official end came the Year of Mercy. The Roman Catholic Church has since the beginning of the fourteenth century, once in a while a holy year, intended for inner renewal and deepening of the believers.

The Pope called in his weekly Mass in St. Peter's Square on 'the doors of reconciliation and pardon' always keep open because it is important to know 'how to overruling the evil and disagreements. '

The sacred year began on 8 December 2015. In recent months, some 20 million pilgrims came to Rome through the open gate of St. Peter or the other basilicas to go inside. That was also in churches closer to home.