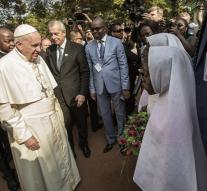 - With a visit to a mosque in a Muslim enclave in the capital Bangui, Pope Francis Monday in the Central African Republic (CAR) ended its journey in Africa. The prelate called on Christians and Muslims to fraternization to put an end to the âÇïâÇïspiraal of hatred, vengeance and bloodshed which in recent years has killed thousands of people.

The visit to the Muslim enclave was surrounded by extensive security measures. Francis had to cross hundreds of meters of no man's land, where Christian militias operate. In the small enclave PK5 many Muslims have sought refuge.

quote, let us together say no to hate, revenge, violence, particularly when perpetrated in the name of religion or in the name of God. God is peace, salam, " said Francis, where he used the Arabic word for peace.