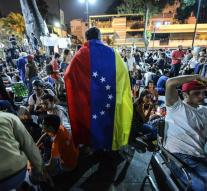 rome - Pope Franciscus summoned Sunday in a speech on St. Peter's Square to end violence in Venezuela and respect human rights. In riots in that country, more than thirty people were killed this month.

For a crowd of tens of thousands of people, the Pope condemned the 'humanitarian, social, political and economic crisis that exploits the people in Venezuela. '

The opposition in Venezuela demands new elections and the release of more than one hundred political prisoners arrested by President Nicolas Maduro's government.

Earlier talks between the government and the opposition in Venezuela led by the Vatican did not matter.