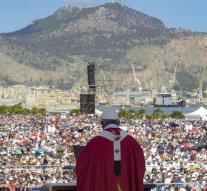 palermo - Pope Francis has called on the Mafiosi in Sicily to give up their lives full of crime and violence and to opt for love. The prince of the Church said that members of organized crime, who are mostly practicing Catholics, 'can not believe in God and can be Mafiosi at the same time.'

Francis remembered in Sicily a priest who was killed by the mafia in 1993 because he fought the control of the mafia over one of the most rugged districts in Palermo. The Pope led a mass for 80,000 people in the port city.

Many members of organized crime in Italy, such as Cosa Nostra in Sicily and Ndrangheta in Calabria, see themselves as members of a kind of religious sect and often call in the help of the Saints in their criminal activities.