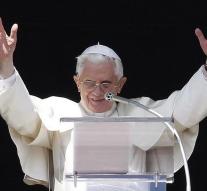 ' Only then there is chance of a prosperous future for all. '' Said the head of the Catholic Church in his speech from the balcony of St. Peter's Basilica in Vatican City.

The Pope concluded his Christmas speech as usual with the blessing ' merry Christmas' and the blessing Urbi et Orbi (to the city and the country).