Home / World / Pope: back to the basics of life 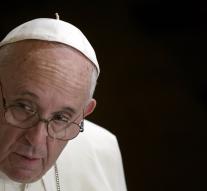 rome - We must return to the basics of life. That message brought Pope Francis Thursday during the traditional Mass on Christmas Eve in St. Peter's Basilica in Rome. Christmas, according to the leader of the Roman Catholic Church the perfect time to 'discover who we are.'

In a society that is often intoxicated by consumption and enjoyment of wealth and luxury, appearance and self-love, Jesus calls us to live frugally. In other words, life in a way that simple, balanced and cohesive and let us see and do what is essential , said the Pope.

Around ten thousand people attended the mass. Which was heavily protected than other years. Near the basilica were many agents in the leg. Francis speaks Friday for the third time in the Urbi et Orbi (to the city and the world) from the traditional Christmas blessing.