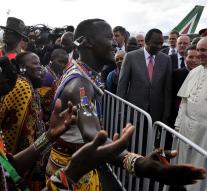 - Pope Francis is Wednesday arrived in the Kenyan capital Nairobi. The pontiff was welcomed at the airport by some dignitaries and hundreds of enthusiastic Kenyans.

During the trip, said Francis accompanying persons against journalists that he begins with joy on his first trip to Africa, where he will, among other attempt to discuss the divisions between Christians and Muslims. His first public remarks in Nairobi were direct and clear : the government should be more care about the poor and the environment. He also said he had no fear for his stay in Africa. He was only afraid of the mosquitoes, he said.

The safety of the Pope in Kenya ensured by no less than 20 000 people, mostly comprising police and army units. In 2013, Islamic extremists carried out an attack on a shopping mall in Nairobi where 67 people were killed.

Kenya is the first country he is doing. He will stay there until Friday. After Uganda and Kenya are the Central African Republic on the agenda of the six-day trip.