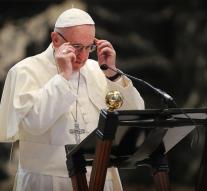 rome - The Argentinian Pope Franciscus has summoned a Venezuelan president, Nicolás Maduro, in a remarkably politically-charged message, on Friday to resign from his 'constitutional assembly'.

The Vatican said that it would be better to dismiss the meeting completely or to postpone the plan. There are 'more and more dead and injured and imprisoned people in the crisis' in Venezuela, 'which is increasingly radicalizing and sharpening. 'The Vatican looks with care. 'In Venezuela, human rights and fundamental rights that guarantee freedom should be respected. '

An estimated 95 percent of the over 30 million Venezuelans are Roman Catholic. The Vatican has previously involved the crisis as a negotiator between Maduro's left-wing government and the opposition that has a majority in parliament since 2015.

Maduro has chosen a 'constitutional assembly' on Sunday to change the rules of the country. The opposition boycotted the ballot box. Maduro wants to finish according to opposition from parliament and opponents. The meeting will meet for the first time on Friday.