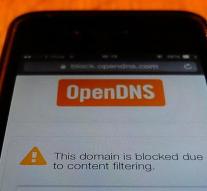 arnhem - Dutch domain names on the Internet are not properly secured. Less than half use DNSSEC, a digital signature that ensures that people end up on the right site and not a fake site passed. For banks it even comes to only 6 percent of all sites. Governments do well.

The Foundation for Internet Domain Registration in the Netherlands (SIDN), which is the domain. en manages, has done research. The foundation looked not only to the 5.7 million domain names on. en end, but also to common areas such as. com,. biz. eu and. just. Internationales ' Neel we do it pretty well. We are in the top five in the world in terms of security. But some sectors remain, '' said a spokeswoman SIDN.

The foundation is critical. Banks should be the main users of DNSSEC, SIDN writes. They have the most problems with phishing scams and fake sites, but scored just the worst. That's according to the SIDN cause for concern. ' With the closing of the physical bank branches and reducing the number of ATMs to the front line of the banks is becoming increasingly important, '' said the foundation Tuesday.

SIDN also looked at the policy, in view of the forthcoming elections. The foundation studied 74 sites of political parties, youth departments, research institutes and extension services. Of these, more than half of unsecured.