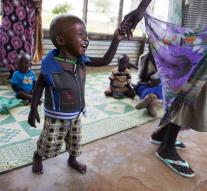 - Despite progress made since the adoption of the Convention on the Rights of the Child in 1989, the world is still an unfair place for children from the poorest countries. This is contained in a report by the UN children's organization Unicef ​​that Friday- on the Day for Children's Rights- has been published.

Nearly 160 million children suffer from chronic malnutrition. About half of them live in South Asia, one third in Africa.

" In just half a little more than one generation of child mortality, is more than 90 percent of children worldwide to primary school and have 2.6 billion additional people gained access to clean drinking water ", said Anthony Lake, UNICEF Executive Director. " But of all the poor of the world, half of them children. 250 million children living in conflict zones and more than 200 000 children have risked their lives to seek shelter in Europe. "

" Children can still get mad when they see injustice. As we mature, we get a bit lost. But we must learn to make us angry again, especially where children are denied a decent future. We can put an end to that dishonesty ", says the plea Lake. Priorities are education, access to clean drinking water and toilets, prevention of HIV infection, and control of diseases (malaria, pneumonia) and diarrhea.