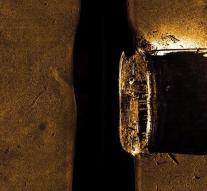 - "The British ship HMS Terror was found in perfect condition after 168 years in Arctic Bay, north of Canada. The Terror did in 1848 participated in a polar expedition of the famous researcher Sir John Franklin when he disappeared in 1848."

"The 31 meter long Terror was a warship with Franklin's flagship HMS Erebus in heavy ice got stuck. In total 129 people on board perished. The ships were trying to find the so-called Northwest Passage, a route to the Atlantic and the Pacific would link up along Canada for shipping, report British and Canadian media."