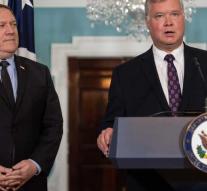 washington - The US Secretary of State Mike Pompeo will return to Pyongyang next week. He is accompanied by Steve Biegun, who has been appointed as Special Envoy for North Korea. That was announced in Washington.

For Pompeo it is within a few months already the third trip to the closed, totalitarian-led Asian country. On July 12th, power broker Kim Jong-un and US President Donald Trump held historical high-level talks in Singapore.

Pompeo introduced Biegun Thursday. It will be his job to realize Trump's Korean goal: full, controllable and irreversible nuclear disarmament.

The US demands that Pyongyang live up to the promises of Kim. The International Atomic Energy Agency recently stated that North Korea is not making any noticeable effort to reduce its nuclear weapons arsenal.