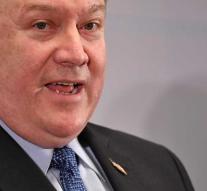 washington - US Secretary of State Mike Pompeo will fly to Asia on Saturday to talk with North Korean leader Kim Jong-un in Pyongyang, among others. The department announced this on Tuesday.

The subject of discussion is firstly to make the Korean peninsula free of nuclear weapons and to prepare a new summit between Kim and President Donald Trump. 'I think it is a sign of progress and momentum that the minister has been going there for the fourth time within a year,' says spokeswoman Heather Nauert. 'Of course there is still a long way to go, but we look forward to the next steps in the consultation. '

Pompeo also visits Japan, South Korea and China on his trip. He will report to the leaders of the countries concerned on the progress in North Korea.