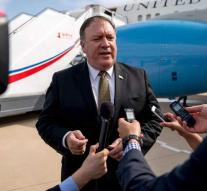 seoul - US Secretary of State Mike Pompeo said Saturday that he has made progress 'on almost all important issues' in talks with North Korea. He also mentioned the establishment of a timetable for the dismantling of the North Korean atomic program. But according to him there is still a lot of work to do.

Pompeo said after a day and a half of talks in the North Korean capital Pyongyang that both parties talk about the repatriation of mortal remains of Americans who perished in the Korean War (1950-1953). He also discussed the 'possibilities' for dismantling an installation to test rocket engines.

'I think we have made progress on every part of our discussions,' he told reporters. 'These are complicated issues. In some areas we have made a lot of progress on other points, there is still more work to be done. '

Before he left North Korea to travel to Tokyo, Pompeo shook hands with his interlocutor, Kim Yong-chol. This North Korean party official played a key role on June 12 in Singapore between US President Donald Trump and North Korean leader Kim Jong-un.