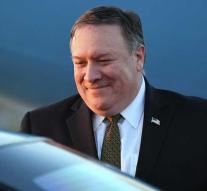 seoel - The United States and North Korea are making progress in their negotiations on the dismantling of the North Korean nuclear weapons arsenal. The US Secretary of State Mike Pompeo reported this via Twitter on Sunday after consultation with North Korean leader Kim Jong-un.

Pompeo spoke with Kim for two hours in the North Korean capital Pyongang. Then the American minister flew to South Korea.

During a lunch with Kim in Pyongyang, Pompeo had already said that they had 'a very successful morning' behind them. 'Thanks for the reception. President Trump greets you, 'said Pompeo.

Pompeo should actually have visited North Korea at the end of August, but that did not happen. Trump then decided to cancel the trip because he felt that there was too little shot in the negotiations about the dismantling of the nuclear program.

Trump had a summit with Kim in June. The leaders made general agreements about denuclearization in Singapore, but the elaboration of this was very difficult in the months after the summit.