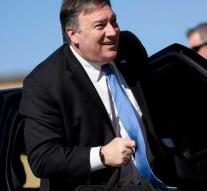 washington - The US Secretary of State Mike Pompeo thinks that the United States should give Saudi Arabia a few days to complete the investigation into the disappearance of journalist Jamal Khashoggi. He said that to President Donald Trump on Thursday, he told journalists at the White House.

Pompeo: 'I told Trump this morning that we should give them a few more days... so that we also have a full understanding of the facts before deciding on an answer. '

The US minister returned Thursday from a trip to Saudi Arabia and Turkey to clarify the fate of Khashoggi. He did not return after a visit to the Saudi consulate in Istanbul. The Turkish authorities reportedly have a sound recording showing that the journalist was killed.

The US Treasury Secretary Steven Mnuchin said via Twitter that he will in any case not participate in an investment conference in Saudi Arabia. That decision was taken after consultation with President Trump and Pompeo.