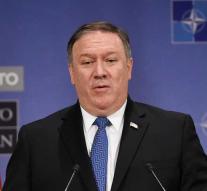 riyad - The US Secretary of State Mike Pompeo has a flying start as a minister. After not reporting twelve hours after his appointment at NATO in Brussels on Friday, he arrived in Saudi Arabia on Saturday, at the beginning of a short journey through the Middle East.

According to US media, he will try to raise support in the Middle East for stricter sanctions against Iran due to the missile program in that country. The US accuse Tehran that the country is supplying rockets that are being fired from Yemen to Saudi Arabia.

Pompeo travels to Israel and Jordan after Saudi Arabia.