Home / World / Political violence Mexico is on the rise 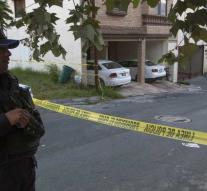 mexico city - With two weeks to go to the elections, political violence in Mexico is on the rise. Armed men shot a mayor on Thursday who had applied for re-election. Another mayor candidate was kidnapped in broad daylight on Tuesday and has been without trace ever since. Last Friday, a politician was shot dead who took part in a provincial function.

The Mexicans go to the polls on 1 July to elect a new president, a new parliament and some 3000 local and regional administrators.

According to the Mexican security consultancy firm Etellekt, at least 113 candidates were murdered during the campaign. That makes this campaign the most violent in Mexican history. Local and regional politicians in particular are the victims, because criminal gangs try to get municipal and provincial authorities under control.