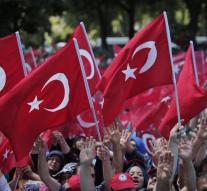 - The Turkish Ministry of Education said Tuesday 15,200 employees in education made inactive. The educational authorities of the Higher Education Council (YÖK) are reported to the newspaper Hürriyet, among others, more than 1,500 executives put in public and private educational institutions on the side. The YÖK demanding that they resign.

The supervisor of the media (RTÜK) Tuesday 24 radio and TV stations closed. They have no more license to broadcast. The Turkish government has been engaged in political purges directed against the liberal, social and religious movement of Muslim scholar Fethullah Gülen. Ankara argues that he is behind the effort of a group of soldiers to seize power in the night from Friday to Saturday.

The alleged supporters of the influential 75-year Gülen be since the weekend by the thousands to cast aside.