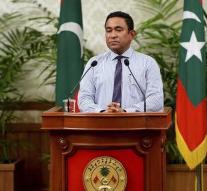 male - In the island state of Maldives, the state of emergency was declared during an escalating power struggle between the government of President Yameen Abdul Gayoom and the opposition. The government in the capital Malé has the order of the Supreme Court to let a series of opposition leaders be ignored. On Monday, the emergency state for fifteen days was declared.

At the end of last week, there were clashes between police and supporters of the opposition. The main rival of the president is Mohamed Nasheed who was imprisoned, but was allowed to go to England as a patient in 2016 and applied for political asylum there.

The Maldives consist of almost 1200 coral islands southwest of India spread over 90,000 square kilometers of the Indian Ocean. Many islands are luxury holiday homes. The total land area of ​​this island republic of almost 400,000 inhabitants is only 300 square kilometers.