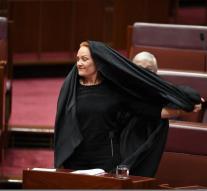 canberra - In an attempt to introduce a ban on the farm, an extreme right-wing Australian politician has attracted a boerka on Thursday and has gone to parliament.

The Australian government and Muslims have condemned the action of senator Pauline Hanson of the party One Nation.

Hanson sat in the meeting room for twenty minutes before calling out the boerka and then demanding a ban on carrying farms in public. 'I'm glad I can do this thing because this is not part of this parliament,' said Hanson. 'If a person wears a bivouac or helmet and wants to enter a bank and any other building, he must turn it off. Why is not that the case for someone who covers her face and can not be identified? ''

Hanson has been fighting since immigration from Asia since the 1990s and against asylum seekers. In recent years, she has poured into the campaign against Islamic clothing and the construction of mosques.