Home / World / Polish soccer fans to blows with each other 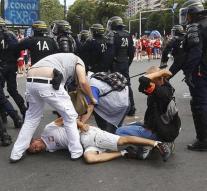 - French police on Tuesday in Marseille put an end to a fight among Polish football fans before the match between Poland and Ukraine. Two Poles were arrested.

Thousands of Polish football fans went Tuesday afternoon, singing and drinking by the old port district of the city. They also strike off smoke bombs. In a group of ultra-fanatical Poland suddenly a fight broke out, but the present officers managed to separate the fighting cocks fast.

Poland plays at 18. 00 hours against Ukraine and was in profit or tie assured participation in the next round.