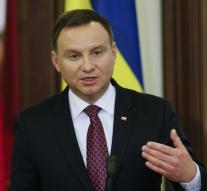 warsaw - Poland's president has signed a controversial law which confines the gourmand power and independence of the Constitutional Court.

The law comes from the pen of the party PiS, which is from October to power in Poland. By law, the Constitutional Court should no longer control the government.

Distressed Poland earlier this month went to the streets to protest against the measure, which is seen by the opposition as a coup by PiS. The European Commission expressed concern over the law and warned of an erosion of the rule of law.