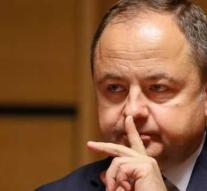 luxembourg - The Netherlands and other European countries are concerned about the development of the rule of law in Poland. The Polish Minister of European Affairs Konrad Szymanski will be asked questions about this in Luxembourg on Tuesday by his EU colleagues.

The hearing is part of the so-called Article 7 procedure that the European Commission launched for the first time in December. According to Vice-President Frans Timmermans, the rule of law in Poland is threatened by political control over the judiciary and the replacement of judges. Warsaw could eventually lose its voting rights in the EU.

Minister Stef Blok from Foreign Affairs, for example, thinks it is 'strange' that judgments in Poland can be revised after twenty years, and he wants an explanation about this. 'That creates uncertainty in a constitutional state,' he said before the hearing. 'An essential part of the EU is that there is independent jurisdiction everywhere. '

Timmermans has been trying to persuade Poles for 2.5 years to respect the separation of powers. He fears irreparable damage to the legal system, especially now that 27 of the 72 judges of the Supreme Court will soon be forced to retire.

Poland says it wants to purge the jurisprudence of legacies from the communist era. Szymanski told his colleagues to explain what the legal reforms in his country are. According to him, all European standards are met. 'Member States have different constitutional traditions and Poland fits within the constitutional pluralism of the EU. '

There will probably be one or more hearings before Member States decide how to proceed.