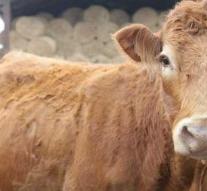 warsaw - Poland has its own cow gate. A cow escaped spectacularly from a Polish slaughterhouse last month and has been living on an island for three weeks now.

That reports the NOS. The owner of the slaughterhouse saw the escape attempt of the cow. When employees tried to catch the animal again, she broke one of her legs. The animal still fled and swam to an island.

The cow is still not caught after a number of attempts. The farmer therefore decided to bring her food every day.

Even the fire brigade came into action to catch the animal, but this was not a success either. Attempts to anesthetize the animal also did not work out.

The owner still wants his cow back, but is considering letting her die by a hunter. Polish politicians disagree and believe that the animal must continue to live.

Politician and former singer Pawel Kukiz has announced via Facebook that he wants to pay personally to give the cow a safe old age.