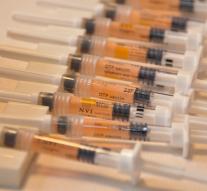 geneve - An eight year old boy shows last month in Laos to be deceased from polio. That is a disappointment for the World Health Organization , which was hoping to have the disease eradicated worldwide .

Polio, also known as infantile paralysis, surfaced recently been in Ukraine and Mali. The deceased child was treated with a polio vaccine but developed the disease anyway. It is the first case of polio in Laos since 22 years, according to the WHO.

The organization fears that polio and other infectious diseases, also in the area around Syria will emerge again because no vaccination campaigns can be held.