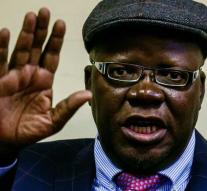 harare - The Zimbabwean police have arrested at the border former Minister of Finance and opposition member Tendai Biti. His lawyer said that. Biti wanted to apply for asylum in neighboring Zambia. The reason for the arrest was not made known according to the lawyer.

Biti is the first leader of the opposition that has been arrested since President Emmerson Mnangagwa has been re-elected. During the last elections his party formed an alliance with Nelson Chamisa, the main challenger of Mnangagwa.

Although the run-up to the election last week was relatively peaceful, the situation escalated after the polls. The opposition thinks that the elections were not fair. Several of Chamisa's supporters were arrested for involvement in the violence. Some have been released on bail.