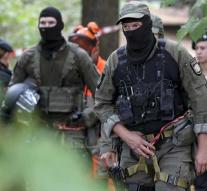 kerpen - The police of North Rhine-Westphalia have started with the deployment of many troops to clear the 'brown coal forest' at Hambach, between Kerkrade and Cologne. Environmentalists have occupied the site for years to prevent the RWE energy group from ruining the landscape for the sake of open mining. Special units took the first activists from the tree huts on Thursday and broke off structures that had been tolerated all along.

RWE wants to harvest the Hambacher forest in the autumn to win brown coal. The tree house population grew into a symbol of resistance against it. Even now the members will not be patient. They announced in response to the sweeping of the area 'civil disobedience' and 'national mobilization of the masses'.

According to the police, they enforced these words by shooting police officers with catapults and pelting them with Molotov cocktails. Because of the disturbances an official was slightly injured, an official car was badly damaged. Three demonstrators have been arrested. Elsewhere, peaceful protesters were on the access roads and kept them blocked for as long as possible.

The authorities gave as reason for the evacuation and did not demolish the intended exploitation of the area. The ministry responsible for public housing and spatial planning in the federal state indicated that the tree houses were not protected against fire. Among other things, the emergency stairs were missing.