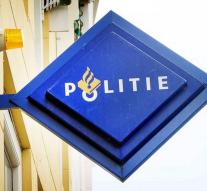 amsterdam - In preparation for the Europride, which begins Saturday, the Amsterdam police has a number of known pickpockets already paid a visit. The aim was a 'warning signal' issue.

Agents called on twenty home addresses. On three of these people were found to have been guilty in the past of pickpocketing and shoplifting.

Crowded events like Europride be a popular field for pickpockets:,, It is cozy and busy in the city. People are close together, 'said Commissioner Chris Price. Police warn visitors via social media to monitor their belongings.