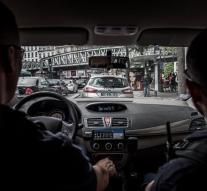 - French police Sunday, an explosive used to gain access to a car parked wrong at the Stade de France in Paris. That happened a few hours before the start of the match France- Iceland in the quarterfinals of the European Football Championship.

The police found nothing suspicious car. Many streets around the stadium will be closed to the traffic for safety reasons.