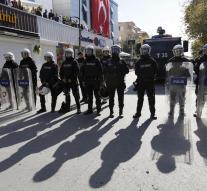 - The police using water cannon has a tear gas Wednesday in Istanbul stormed the headquarters of the media group Koza Ipek Holding. Numerous people for the property vainly tried to stop the police and new management.

The police carried out a court order. That particular Monday that the company will be placed under state control and that administrators are appointed for it. The company is accused of illegal financial practices and would be funded by a terrorist organization.

With that organization meant justice movements around the progressive Islamic scholar Fethullah Gülen. The US resident Gülen was once an important ally of the politician and Prime Minister Recep Tayyip Erdogan, the current president. Since 2013, the two engaged in a bitter struggle. Media Koza Ipek are critical of Erdogan. Sunday there are elections.