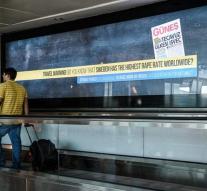 - Turkish police on Sunday fired shots at the Ataturk airport in Istanbul. This was done according to CNN Türk when a motorcyclist refused to stop. A person would have been injured, a second man, according to the transmitter still on the run.

Authorities closed the airport in the aftermath of the shooting at least partially. Motorists were not allowed to drive onto or leaving the premises of the airport, the news channel reported.

The airport was earlier this year, still the target of terrorists. In June, three suicide bombers blew IS located in a terminal. Thus 45 people died.