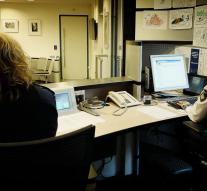 amsterdam - Previously, in police investigations binders full of seized documents , but now it's about ontiegelijk more information on smartphones, tablets and computers. To address this sea of ​​information to cope , the police together with the Dutch Forensic Institute ( NFI) developed a system to organize data for investigators and to be able to search much faster : Hansken .

This system has been used on a trial basis in a number of studies, but starting this month deployed in all major studies. "The system organizes digital information and put it up for the detectives will get to work," explains Pieter-Jaap Aalbersberg out. Aalbersberg within the National Police responsible for the project Hansken.

In this way, much time can be saved: it previously took more days to organize digital files and view, now it is in hours. Investigators can thus much faster with the data to work from, for example e-mails, photos, chats, videos and whatsappjes. "This way we can stream digital data to better track. And what are the chances that we missed a lot smaller," said Aalbersberg.

In the past, several cases were dropped because it took too long before the digital certificate was around. That is the new system of the past, the police hope.

Hansken is the successor of the system Xiraf, an NFI system where the police are already working with. The police expect that it will be useful, among other things investigations into cybercrime prove.