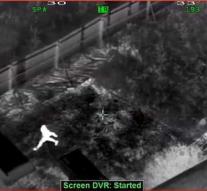 sacramento - In the United States, noise has arisen because agents have shot an unarmed black man. For days there have been protests in the city of Sacramento. Research by order of the relatives shows that Stephon Clark was shot eight times in the back and the side.

That is what American media write. Agents shot Clark earlier this month after a report about a man who had car windows. Clark then fled to his grandmother's garden, where the police fired twenty bullets at him.

According to the police, the police believed that Clark was armed. On images of a bodycam, according to The New York Times, an agent is repeatedly shouting 'firearm' and starts shooting almost immediately. Clark later appeared to have only a phone with him.

After the death of the man, the family carried out autopsy. An expert concluded that he was hit by eight bullets, none of which penetrated the body through the front. According to the lawyer of the family, that shows that Clark was not a threat and died under 'dubious circumstances. '