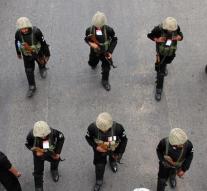 quetta - Armed men on Monday a police training center in the Pakistani city of Quetta stormed and taken an unknown number of people hostage. Reported that the Pakistani TV channel Samaa TV. Authorities fear the dead.

The school and the area around it are dropped off by the police and members of the Frontier Corps, the paramilitary organization that maintains order in parts of Pakistan. There are fierce firefights going on. A spokesman for the provincial government there are five hundred cadets in training at the school. How many of them are being held hostage is still unclear.

In 2014, extremists attacked a school of the army in the Pakistani city of Peshawar. More than 140 people were slain while.