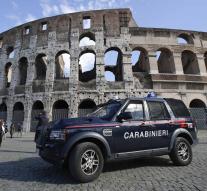 rome - A 31-year-old Turkish Dutchman in Rotterdam by police in Rome arrested because he made a movie of the Colosseum with a drone. He had to direct the drone downing and was then taken to the police where he was fined and a police report. The man, who was with four friends, said he had made the recordings for a wedding. For the Italian police had with this statement not affected the case.

Police in Rome is in fact extremely vigilant against possible attacks by Muslim terrorists and strictly forbids the use of drones in central Rome. It is precisely the Colosseum belongs to one of the possible targets. Therefore, the police of the Dutchman and his friends have the tickets and their mobile phones checked to see if they had contact with Muslim extremists. Then they all released the same evening and are flown back to the Netherlands. But the police have the precious white drone by remote control or confiscated.