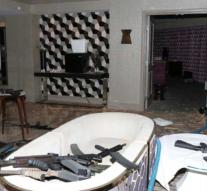 las vegas - The Las Vegas police have released new photos of the hotel room of Las Vegas shooter Stephen Paddock, including one of the dead body of the mass murderer.

The photos also show how he managed to conceal cameras, that he had broken the window of the hotel room and also countless weapons and ammunition.