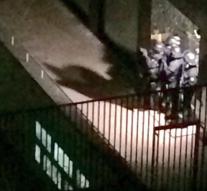 - A heavily armed police on Saturday night raided the Pullman Paris Tour Eiffel Hotel in Paris. The police are with many people present around the building in the fifteenth arrondissement.