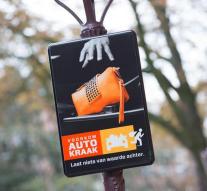 amsterdam - The police will use large amounts of information to respond more actively to crime and its appearance. This enables agents and the available resources to be deployed in their neighborhoods more effectively.

The Amsterdam police have developed a computer system that makes weekly analyzes based on local and current data. It concerns external data, such as neighborhoods and residents, supplemented with information and knowledge of the police themselves about crimes and local situations.

A test in four cities took a good look and therefore the system is being introduced nationwide, police announced Monday in Amsterdam. In the meantime, 94 basic police teams in the Netherlands use these local 'smart hotspot cards' for their own neighborhood.

The goal is to join all 168 base teams at the end of this year. The Netherlands would then be the first country to have introduced this form of predictive police policy, according to René Melchers, rural project leader of the Crime Assistance System (CAS).

He calls the new system 'promising', but it needs to be further developed. 'It is difficult to show the results with numbers because it is not clear how many crimes are prevented. If the analysis shows that there is a lot of street robbery at some point, the police can monitor it so there are few robberies, 'Melchers said.

According to Melchers, the introduction of the model costs little money because it has been internally developed as an example of an American system. It is also not intended to save on staff.