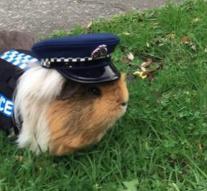 - The New Zealand police have deployed a guinea pig to ensure that people are driving less hard in traffic. Constable Elliot carries the same police blue as his human colleagues and is a hit on social media.

The guinea pig is small and can not be seen properly, just like little children in traffic. Elliot has to draw attention to this and that seems to be successful.

Animal lovers have commented on the action of the police, according to the NZ Herald. They speak of animal abuse.

According to the police, everything goes well with Elliot. 'According to his human' mama 'the guinea pig is very spoiled. Elliot likes to do trips and to be saddled by people. We take care of our animals. Do not worry. '