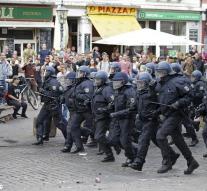 hamburg - The authorities in Hamburg have conducted a preliminary investigation into potentially violent acts of 35 agents during the riots around the G20 summit in the city. In 27 cases, it was examined whether the agents had unnecessarily suffered physical injury to riders, reported the Süddeutsche Zeitung on Friday.

Mayor Olaf Scholz had earlier ruled out that the police had violated rules. In addition, he received support from an international corner. For example, Jean-Claude Juncker felt the criticism of the police's 'unjust and incomprehensible' action. 'According to the President of the European Commission,' every police officer has put his life at risk '.

The incidents around the Hamburg summit lasted four days. During that time, riders left a trace of destruction. Nearly five hundred agents were injured.