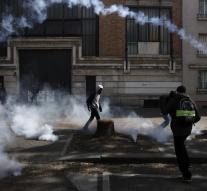 paris - A French police officer was severely burned on Monday and two others were injured in a 1-May demonstration in Paris. Demonstrators threw Molotov cocktails and other explosives, according to the police.

Television shows showed a police officer who was on fire and streets full of tear gas around the Bastille monument. This May 1st day came less than a week before the final round of presidential elections between Social Liberal Emmanuel Macron and Marine Le Pen of the Right Front National.

Some unionists and left-wing activists took the day to express national solidarity against the Front National. Marine Le Pen expressed her support for the wounded police officers on Twitter and said that the incident of a kind of unacceptable behavior was that she no longer wants to see in the French streets.