Home / World / Police officers are not guilty of slaughter 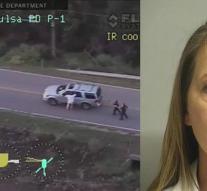 tulsa - According to a court jury in Oklahoma, white police officer Betty Shelby, who shot an unarmed black man last September, is not guilty of slaughter. The fatal incident, recorded on video, caused the national debate about racist tendencies to be recharged by US law enforcement officers.

43-year-old Shelby denied that skin color was a part of the shooting that Terence Crutcher (40) was living. She was left alone and acted only by the conduct of the suspect whose car blocked the road. She thought he wanted to grab a firearm through the open window. The jury believed and spoke to her after about nine hours of meetings. Some members were clearly motivated. The widely discussed trial lasted a week.

On the images that passed the world, Crutcher is seen with his arms up. The Tulsa police admitted that he was unarmed and that there was no weapon in his car. The public prosecutors said Shelby had no reason to open fire on a man walking from her. She blamed her for routine work in traffic on a deadly confrontation by unreasonable performance and escalating the situation.

The lawyers of the accused agents, among other things, claimed that Crutcher had used the hallucinogenic drug PCP (angel dust). The OM found no reason to use fatal violence. 'This is a bitter pill,' the victim's sister responded to the sentence. 'The facts were clear. The factors were clear. Terence's hands were in the air. He did not constitute a direct threat. '

Outside the courthouse in downtown Tulsa, about fifty people protested. They scanned 'no justice, no peace' and hindered traffic at a crossroads. The demonstration proceeded without violence. Also for the hotel where Shelby presumably stayed, was demonstrated loudly.