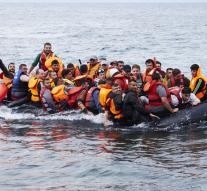 - The police Wednesday during an international operation broken up a network of smugglers of refugees. A total of 23 suspects, mainly Syrians and Greeks, were arrested. The coordination of the smuggling was owned by an Albanian. That Europol announced in The Hague.

The arrests took place in Austria, Greece, Sweden and Britain. Police say the group smuggled mainly Syrian refugees from Turkey towards Greece and the Balkans. The transport of the refugees was mostly carried out by Greeks. The headquarters of the network was in Greece.

According to Europol, the group was active since 2013 and smuggled to a hundred people a day. The merits of the network is estimated at approximately 10 million euros.