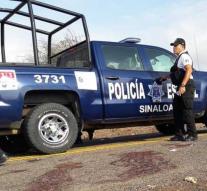 mexico city - The Mexican police have arrested the leader of the violent criminal gang La Línea. Carlos Arturo Quintana, better known under the alias El 80, is responsible for, among other things, violent incidents in the northern province of Chihuahua, according to the Minister of the Interior Alfonso Navarrete through Twitter.

La Línea is the armed branch of the Juárez cartel. In Chihuahua, the Juárez cartel is fighting the Sinaloa cartel for power in drug trafficking. Quintana was also one of the most sought-after persons on the FBI list. There is an extradition request against him, because he would have been guilty of smuggling drugs to the US.

El 80 is also accused of the murder of a journalist in Chihuahua last year. Next to the body of Miroslav Breach a note was found stating: 'because you talked too much. Follow your Governor. El 80 '.