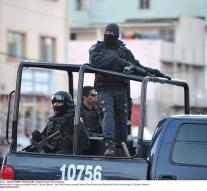 mexico - The Mexican police found the bodies of five beheaded men on Friday. The lugubere discovery was made in the coastal state of Veracruz by the drug and smugglers of the Gulf of Mexico.

The bodies were dumped in an open field in a suburb of the city of Juan Rodriguez Clara in the south of Veracruz. The slaughter party may be the work of the Jalisco New Generation cartel, which has claimed the responsibility through a letter.